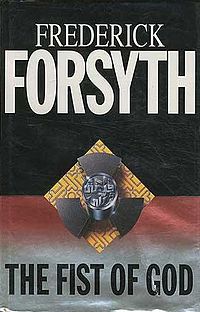 The Fist of God by Frederick Forsyth is based on the enterprise of coalition forces set during the Gulf war and is quite fast paced and intense. The research and the groundwork are very precise, wherein the plot, set through Middle East, Washington, London, Saudi Arabia and Baghdad. The descriptions of places and people are quite detailed and vivid, once you manage to understand the first few chapters, it gets quite gripping.

The story revolves around, Major Mike Martin, a British SAS officer, born and raised in the Middle East. He passes for an Arab owning to his dark complexion and perfect Arabic. When the story begins, he is operating undercover in Kuwait, posing as a tribal nomad, known as the Bedouin. With bare essentials he recruits, organizes, and trains a resistance movement consisting of students, but then suddenly, he is pulled out of this covert operation and reassigned to a more dangerous mission in Baghdad. His new directive is to make contact with a traitor in Saddam Hussein’s inner circle code named ”Jericho”.

As the story proceeds, Martin successfully makes contact with Jericho and passes on classified information. In due course, the Iraqi counter-intelligence begins to hunt him down; the irony is that, the head of this spy-busting department happens to be Hassan Rahmani, who has been Martin’s classmate and closest childhood friend.

Even though, the basic plot of the book is identical to the movie The Guns of Navarone, a secret weapon hidden deep in the mountains. The weapon here is a Super gun, code named The Fist Of God, capable of firing a nuke. This weapon is so well camouflaged that the spy satellites hovering over Iraq are unable to locate them. Hence, someone has to be sent to get first hand information.

The climax is built around the identification and destruction of the secretive location that houses this powerful weapon conceived by Dr. Gerard Bull, a real life Canadian scientist, who primarily developed the super gun to launch satellites into space. It was later modified to accommodate a nuclear warhead, but as soon as Dr. Bull discovered the truth, he gets assassinated.

In conclusion, this book is a combination of facts and fiction that is absolutely a pleasure to read. One minor drawback is that there are too many characters in the book and it may get a little confusing at times. In effect, this works as a spy thriller, with detailed description of various intelligence agencies. This book is definitely a must read, it is gripping, very detailed and totally spell binding. Not a novel to be missed at all.